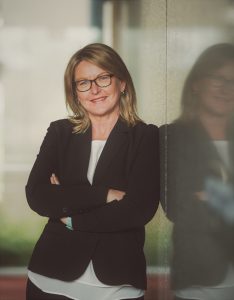 Dr Moira Jenkins is the founder and  a Director of South Australian based Aboto Pty Ltd. She began her career as a clinical psychologist, however her career has developed from pure clinical psychology into the area of psychological/mental health in the workplace, management of high conflict behaviours and dispute resolution.

She takes an evidence based approach to assisting organizations prevent and manage workplace bullying, discrimination and harassment and other potential workplace psychological hazards.

She is an Adjunct Lecturer in the School of Psychology at the University of Adelaide where she provides teaching input into the Masters of Organisational Psychology program.

She is also an elected member on the City of Victor Harbor Council and involved heavily in local government and governance issues. She has a husband and dog who are very patient.

Prior to launching Aboto, Moira worked as a trainer and conciliator for the South Australian Equal Opportunity Commission and was the Manager of the Complaint Handling Section of the commission.

Moira’s PhD is from the University of Adelaide and her thesis focused on the different perspectives of workplace bullying complaints from the targets, the alleged perpetrator and the HR professional’s perspective, with the aim of identifying ways in which organisations can better prevent and respond to conflict and allegations of bullying.

She has postgraduate qualifications in both mediation and conflict management, and is a member of the Leaders Institute of South Australia alumni, following her completion of the 2013 Governors Leadership Program.

In 2012 Moira was awarded the  Augusta Zadow Scholarship through Safe Work SA) in order to assist her develop a return to work program for workers who had been bullied out of work. Part 1 of that project involved  convening ‘World Café style focus groups to investigate impact of bullying, and the needs of ‘out of work’ participants who had been bullied. The results of this preliminary study have been presented at both national and international conferences.

Since 2005 Moira has worked with senior managers, HR consultants and staff from many organisations both large and small, as well as departments in the Federal, State and Local  government sector,  non-government sectors and private industry. She brings both an evidence based and very practical approach to Aboto services, along with an understanding of both the current legal requirements and the latest research in the area.

Moira Jenkins,  has partnered with Rapid Global to provide the absolute best quality online interactive training solutions in our area of expertise.

Aboto is located in South Australia, and while Moira lives on a 40 acre property with her husband and Rhodesian Ridge-back puppy on the Fleurieu Peninsular, she is happy to leave this little piece of paradise to work all over Australia and sometimes in New Zealand.

Please contact us if we can be of assistance.

Our bullying & harassment online training has been developed with our expertise and will provide trainees with excellent grounding around issues of workplace behavior.

If you are developing or redoing a workplace behaviour policy a really good way to start is to purchase a policy template from us. This template is based on our experience of current best practice which is to have an effective yet practical document.